Admittedly, there are some unique things that make this race special for me. I’m from Chicago, and while I’ve lived in Texas since age 13, I still consider it my hometown race. My Dad has also run every year since 2010, so though we live thousands of miles apart, it’s something to bond over and look forward to and complain about. (Especially those mid-August 20-milers. Brutal!)

Indeed, the MacLeods have many traditions built around this race. We always go to the expo on Friday (MUCH less crazy than Saturday), we always book a table at Francesca’s for our pre-race carb-loading, (if you haven’t booked an Italian restaurant by now, you will be eating at 4:30pm), and my step-mother always takes the lead on ordering some form of ridiculous, family-themed race paraphernalia. (We’ve been joined by cousins, aunts, and uncles and have had our mugs plastered on T-Shirts, pens, Post-It Notes, and, yes, mugs.)

But I think even without all the family history, I would STILL love this race. From the flat, fast course to the crowd support to the efficient logistics, Chicago has no equal in marathoning. If you go in prepared, I promise you will have an amazing experience. What follows is my personal advice.

Note: The official course map is here if you want to follow along.

As mentioned above, I strongly recommend going to the expo on Friday. You’ll halve the crowds you have to deal with, and the vendors working the booths won’t be exhausted and miserable yet. Also, there are a LOT of booths. And plenty of running celebrities, good shopping, etc. It’s Christmas for runners, so I recommend bringing some cash and giving yourself a solid two hours to explore at leisure.

And that’s a Friday crowd…

Throughout the race, it’s much easier for a runner to spot a spectator than vice versa. For the best chances of catching a glimpse of your support crew, pre-plan your meeting points and give them some sort of large sign to carry. My husband carries a large Scottish flag. This gets him noticed by me and the 10 or so actual Scots who typically run in a given year.

Your runner will notice this. I promise.

Of all the races I’ve done, Chicago has both the most runners and the most efficient start. (None of this sitting on Staten Island for 2 hours business.) Get to your corral in time for the 30-minute cut-off, but don’t bother being 90 minutes early. That will just leave you standing in the cold. Yes, even in the “hot” years, it’s still chilly on the lakefront at 7am. As for Gear Check, I’ve never done it. Do you want to “check” your cell phone and wallet with 20,000 other bags? I didn’t think so. If you have a friend or family member out supporting you, give them all your stuff and agree to meet in the Reunion area after the race. If you’re on your own, take your key, ID, and credit card and run with them.

The race makes a big deal about going through 29 neighborhoods. It really does go through that many, but you’ll honestly notice about 7 of them. The first of these is the Loop, which is the downtown business area. This means lots of tall buildings and sharp 90 degree turns. Since you’re near the start, this is the most crowded you’ll feel, but that’s actually a good thing. It’s virtually impossible to go out too fast at Chicago. You’d have to shove people out of your way, and again, you’d feel like an asshole. Just relax and look up occasionally. The city is majestic.

The first part of this stretch is technically the Near North neighborhood, and it’s an ideal place to send spectators if you have them. Miles 4 and 11 are literally two blocks apart. My family likes to fill the hour in-between with mimosas at one of the many brunch pubs in the area. Miles 5 and 6 are quieter, but also some of the prettiest on course, as they take you through Lincoln Park. This is where the course really does get narrow, but by now the crowd will finally start to thin, so it shouldn’t be an issue. (You’re never going to be running solo on this course, so give up that dream now.)

When people talk about how fun and beautiful the Chicago course is, this is usually the stretch they’re referring to. Every year, this section wins the “What’s your favorite neighborhood on course?” poll on the race web site. And while it’s not actually my personal favorite, it is one giant, motivating block party. You will see lots of drunk college kids, lots of drag queens, and lots of the beautiful brick architecture that only exists in northern cities built before cheaper materials were discovered.

Yeah, this section technically goes through neighborhoods, but once you cross the halfway point, things get a little less exciting for a bit as you head to the more industrial feeling areas around the United Center. Luckily, rents closer in are getting so high that there are new apartments (complete with balconies and spectators) every year. This section also takes you through the Charity Block Party, where you will feel humbled by the sheer capacity of runners to do good. Yeah, it can be annoying to have to raise money because you missed the lottery, but the support the charity volunteers provide is more than enough payback.

I’m not kidding. There’s a HUGE bank of Port-A-Potty’s right behind the aid station as you turn from Van Buren to Ogden. They are never full. If you think you’re going to have to plan a potty stop on course, this is where to do it. Bonus, after the aid station you get some more pretty, tree-lined neighborhoods. Enjoy it because…

This is the deadest part of the whole course. Oh, there will still be people out, but you’ve had 17 miles of 3+ deep crowds. Well, Ashland’s not pretty and it’s not on public transit. Plus, this is where you realize you only thought you were headed back toward the lake. The extra jut west is just cruel and unusual. Just gut it out, because there’s a huge party waiting for you at 19. 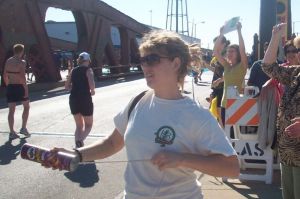 It’s not a hill! It just looks slightly…uppish.

Now you are entering my absolute favorite neighborhood: Pilsen. It’s the heart of the Mexican community in Chicago, and if you are from, say…south Texas, it feels like home. HUGE block party. The whole neighborhood is out, with music, dancing, and all sorts of free food. (You’re at mile 20 though, so eat at your own risk.) If it’s a hot day, these are the Chicagoans you can depend on to have their hoses out.

The dragon was right behind me.

Half a mile after you get some nice hose action and an orange slice, you turn left and, boom!, dragons. Or dragon dancers more like. And also LOTS of spectators. You’re in Chinatown, and running by the biggest cheer station on course. Soak in the encouragement, because you’re now well into that dreaded last 10K.

As you leave Chinatown, you track south on the Dan Ryan Expressway. Okay, you’re not really on the expressway, but you are definitely on the frontage road. There’s a well-placed aid station to help distract you, but watch your step. It has bananas.

Ah yes. Roosevelt. The infamous one hill on course. It’s really not that bad. It’s maybe 400 meters and probably not even as steep as your driveway, but it does look like a mountain after 25.9 miles of flat. You’ll see several runners stop to stretch here. Rather than think about how hard the hill is, focus on how you’d like to scream at them: “What are you doing??? We have 800 meters! You’re going to stretch now?!?”

Hooray! You’re done. Kind of. It’s still going to be a good 3/4 of a mile to the Reunite area, so prepare yourself. You might see some people give up and lie down halfway there. DON’T join them! This will get you dragged to a medical tent, and your family will worry. 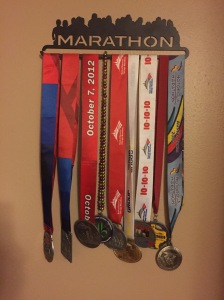 I will say they are not super creative in medal design. Then again, their title sponsor is a bank.

This entry was posted on September 15, 2015 by RunFiestaGal in Uncategorized and tagged Chicago, course preview, marathon.