This weekend I had probably the best long run of my running career — 20 miles with a 10:53 average (that’s fast for me) on a sunny day. The only negatives where the guy relieving himself next to the running path, the large man on the bicycle with ill-fitting tights (he passed me twice in case I didn’t get a good enough look the first time), and the fact that my iPod has categorized “Speak German with Michel Thomas” as “music”.

All in all, it was a pretty boring run in terms of blog fodder, so instead I’m going to tell you about last week’s run. A mere 10 miles. What could possibly go wrong?

Many of you know that I often advocate for running as a way to explore a city. Now I am forced to register a caveat: I absolutely do not recommend you use running as a way to explore any German city that is not a major tourist site. And by major tourist site, I mean “big enough to have lots of signs in multiple languages directing you to points of interest”.

Interestingly, for a town on the border of 3 countries (Germany, Belgium, and the Netherlands), Aachen is NOT one of those cities. At most intersections, you’re lucky if there’s a sign in German. The locals learn to navigate the city center by landmark: “It’s near the Elisenbrunnen…go to the Hauptbanhof…oh, I’ll just meet you on the Marktplatz.” And for anything outside of center they use GPS. (Although I’m convinced part of the GPS obsession is for entertainment purposes. You haven’t lived until you hear the electronic lady try to say “Adalbertsteinweg”.)

In such an environment, what in the world was I thinking mapping a route I had never travelled before??

It all started when a coworker told me about this:

A track! An honest-to-God, open-to-the-public running track! With visions of speedwork dancing in my head, I determined that I would find this magical place and make it my own.

One minor glitch. That track is about 2 miles from our apartment. “Oh well”, I thought, “good warm-up.” But since I always do speedwork in the early, pre-dawn hours, I thought I better swing by it in the daytime first, just to make sure it wasn’t in a completely shady part of town. (You never can trust college students…)
So I planned the first part of my 10-miler to look like this (the track is right below the 2):
After cruising by the track, I’d be able to hop on to the outer ring (the sharp left you see after the 2-mile point) and be back on familiar running turf. Here’s what happened:
That big blue line that says “Turmstrasse”? That’s the ring. And that red line that turns in the opposite direction? That’s me missing it completely.
You’d think I would have been tipped off by the fact that I had to cross under the railroad tracks that I was supposed to be running parallel to, but I kept thinking, “Oh, I’ve just missed a turn. I’ll get back on track.”
And that’s the philosophy that carried me all the way through this:

If you don’t live in Aachen, it might be difficult to fully appreciate the gravity of this situation. But basically, that big blue ring that goes through the word “Aachen” is what I meant to end up on. And I did. Eventually. Around mile 8.

But let’s not fast-forward through all the excitement. First, how did I turn left and head out of town when I should have turned right into town? Well, that’s a funny story. See, Aachen does occasionally use signs – big yellow ones that direct traffic toward the center or outlying towns. And I saw one that said “Zentrum” and went for it. Apparently there must have been a second sign for the U-turn.
I took a detour up someone’s driveway and back (oops) and then ended up on a fairly busy road that I had never seen in my life. I was getting a little bit nervous, and I just about jumped out of my skin when a little kid on a bicycle road up behind me yelling, “Beep beep! Beep beep!” He was wearing a yellow reflective vest that said the equivalent of “worker” on the back, and in a brief moment of irrational anxiety, I thought the Germans were now sending 6-year-olds out to police the sidewalks. (This is Germany, you never know…)
After that encounter, I started to think things were thinning out too much, so I turned right in what I thought was a “toward the city” direction. I was made even more confident about that decision when I found myself in a park. “Oh,” I thought, “This must be that Lousberg park on the map. Perfect!”
Err, not quite: 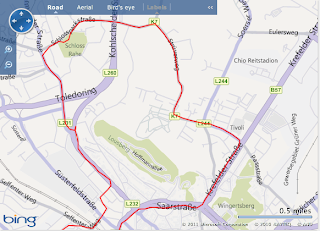 And 5 minutes later I was here:
At this point I was almost in tears. I couldn’t see anything but hills and fields around me, and given that I was completely lost already, backtracking wasn’t really an option. I kept going, trying to appreciate the scenery and rehearsing what I could say to a German farmer to try to explain my plight. (“Entshuldigen Sie, bitte, ich wohne in Aachen, und ich habe keine Ahnung wo ich bin…” And then I figured I could fall back on my excuse for 90% of my mistakes, “Ich bin Amerikanerin.”)
Luckily, I never had to move beyond the planning stages, because just when I thought all hope was lost, I saw the most beautiful site of my adult life: Sporthalle Tivoli. The Aachen soccer stadium. Thank you GOD! I have never been so happy to see the black and gold in my life.
Now granted, the soccer stadium was both a) not anywhere near where I thought I was and b) about as far from our apartment as you can get and still be in Aachen, but those were minor details. After my semi-serious concern that my long run was going to end up in Amsterdam, I was beside myself to find a landmark I actually recognized…and could get home from.
The only real downside: It was a home-game. My run home involved dodging in and out of hordes of people in various states of inebriation, all staring at me as if I’d absolutely lost my mind. Based on this embarrassing fit of directional overconfidence, perhaps they were right.
We’re going to Munich next weekend. I’m supposed to run another 10-miler there. I guess that leaves me with only one good way to close this post:
To be continued…

One comment on “Bringing New Meaning to the Word "Lost"”

This entry was posted on March 7, 2011 by RunFiestaGal in long runs, lost.